The week has finally come to a close. It was our first solid week of continuous boat work. It’s kind of nice when a task has a few stages and is just a matter of time to get it done. The work isn’t complicated but it’s time consuming. Garrett’s been stuffing the seams with cotton while I’ve been filling the bottom seams with tar. I dance around Garrett to prime the seams after he’s done caulking. Garrett switches between the mallet and his new toy, the electric caulking gun:

After going through two tubes with the manual gun we thought there’s got to be a better tool for this! We searched Craigslist because buying one new was going to be somewhere around $140, since we also needed to purchase the battery and charger. We found one less than an hour away for $30. This thing goes through a tube in less than a minute evenly filling the seam. We can’t buy the compound fast enough now!

We’ve had a few rainy days which has swollen the planking a bit. It’s neat to look at the seams we’ve already filled and fared and see after the planks have swelled they’ve pushed the compound out a little. The wood’s alive! 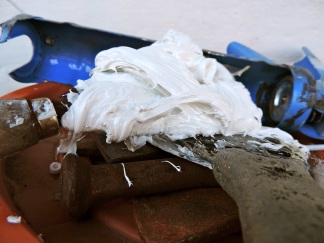 But…. because of that rain the cardboard tubes of compound got damp. Trying to slowly push the sealant out still didn’t stop every tube from rupturing.

So we didn’t get too far on filling the topsides… The starboard side is over half way done though which is exciting! 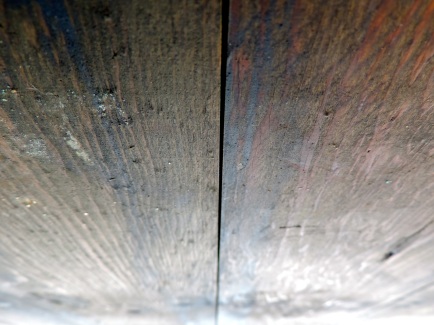 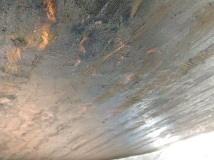 I’m in charge of the bottom planks. The rain’s made my job a little easier as the seams keep getting smaller. I’ve narrowed the starboard side down to just 5 seams left to fill. It’s really cool seeing the hull become fare. I started on the sunny side so unfortunately I’m about to switch to the dark side. The port side sits in the shade most of the day and really holds the cold air in Rediviva’s shadow. 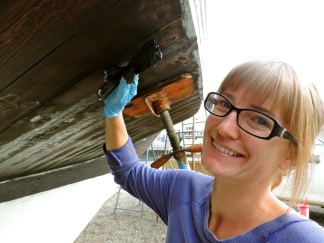 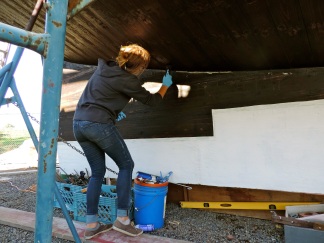 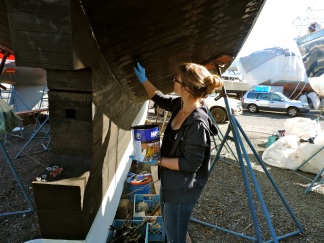 Give this guy some cotton and he’ll be stoked 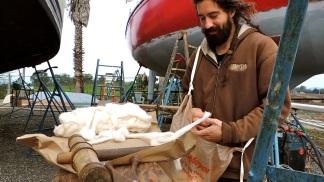 Garrett’s dwindled the caulking to just 6 seams on the transom left to be stuffed. He’s really perfected the technique. He moves along the planks so quick. Getting his loops beautifully even.

I’m sure it’s become like second nature as it’s so repetitive. He cleans/reefs out the seams, makes his loops, then comes back over and drives the cotton in with the mallet. 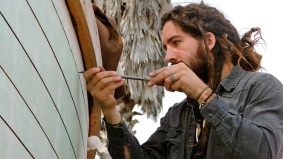 Sometimes it’s easy and he can just use the screwdriver reefing tool but other times the tar used to bed the planks is thick and dry and he needs the oscillating saw. 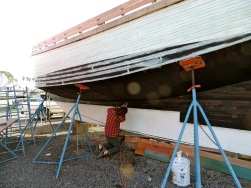 especially in the rabbet and corners of the transom

But that’s not the fun part. The fun part is realizing the boat is nearly completely caulked!

Garrett’s had such patience and persistence building Rediviva. I remember when she was just a crazy idea and Garrett had this vision of getting to the point where he was caulking the seams of the boat he built himself. Well here we are. A fantasy now reality. I’m sure it’s not quite as sparkley as the daydream once was but I think the truth comes pretty close. Rediviva is stunning and we can’t wait to see what she’ll look like finished. 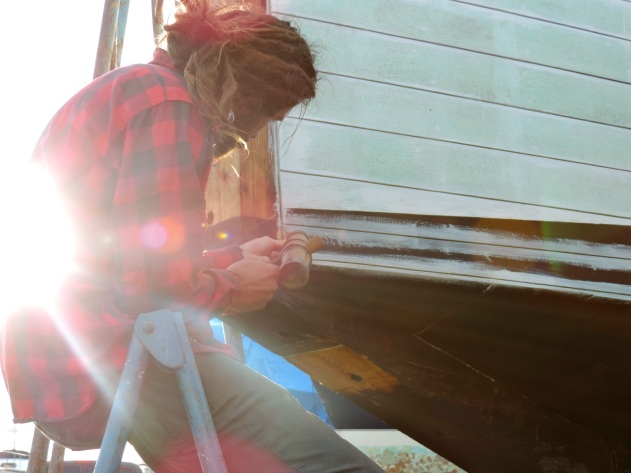 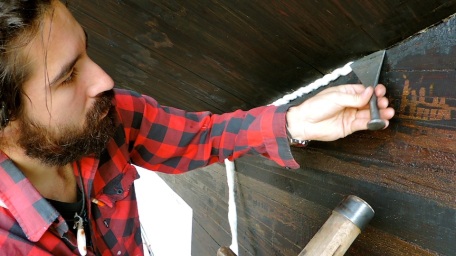 Today will conclude the cotton caulking.