We’ve been trapped inside as the rain continues. I, too, love the rain as a sit with coffee in the morning but then the day has to start and the rain could stop then 😉

We know very well you can’t control the weather so on the bright side the masts are closing up nicely. The hot Napa summer took a beating on our poor main and mizzen. Mostly our fault…as we didn’t oil them as often as we should. Something may have to be done but it’s impressive how the wood is continuing to swell and those checks look a little less scary. A problem for another day.

Now that the driveline is in (while we wait until we can afford the thrust bearing and various other hoses and parts to finish the engine) Garrett’s back to working on the interior. First, he boxed in the engine then installed the half bulkhead to enclose the head.

The engine box is incorporated into the interior and is apart of the dinette seating. The box will be entirely removable for optimal engine access. For little stuff, there will be hatches all around. To remove the whole thing Garrett’s going to install a hoist system so it can go straight up from the deck beams and if need be he and I can move it from there and place it anywhere, it’ll even fit out the companion way. Next to the engine box will be the other side of the aft dinette seat with a half bulkhead there too. 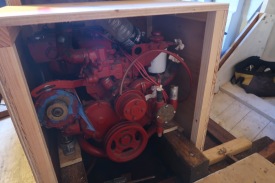 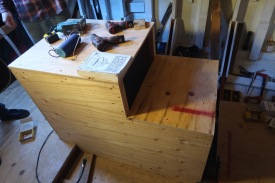 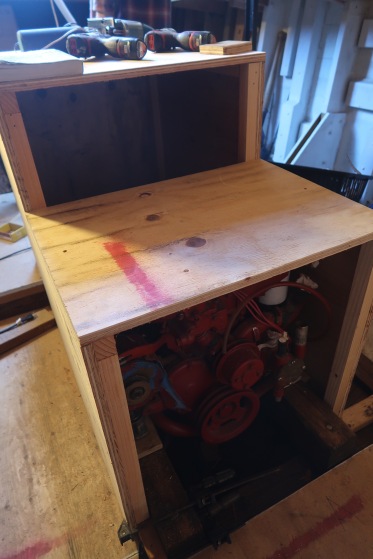 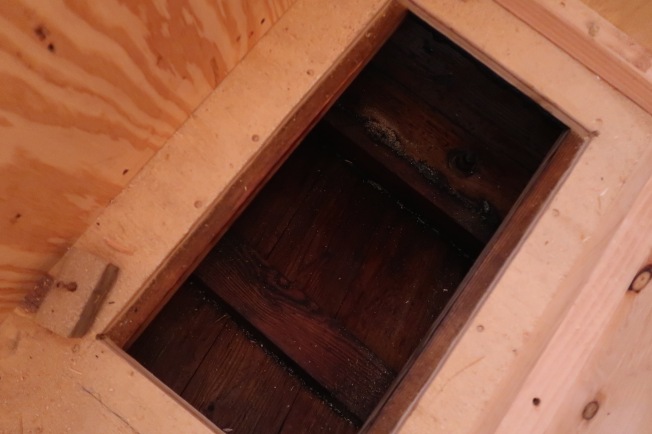 These are easy to construct and Garrett’s mainly ruffing in the interior to get the feel of the flow through the cabin. Later, he can go around and add hatches to everything but right now he’s just focusing on the big stuff. Like bulkheads: 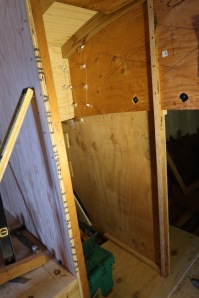 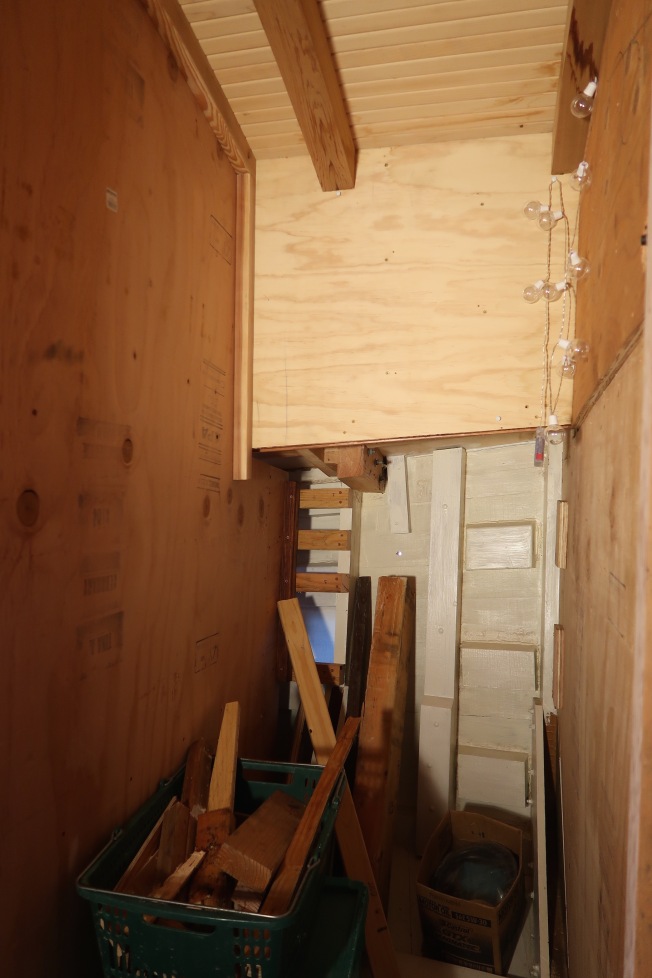 The other side of the head (toilet) is now done. This is probably as far as he’ll go with the head area for now. Once everything is ruffed in then he can go around and do the finishing touches in each area. It will look amazing when all the plywood is paneled with beautiful timber. Right now it just looks like a construction zone.

To move forward and work on the main bunk we had to rearrange some things. Our bed has been atop our plywood storage. In order to not accidentally close in the plywood up forward we had to move it to under the aft deck. We did this before installing the head’s half bulkhead or we wouldn’t have had enough space to do it! We’d been storing a bit of our stuff under the forward bunk which also had to find a new home under the aft deck. It’s a tight space…. 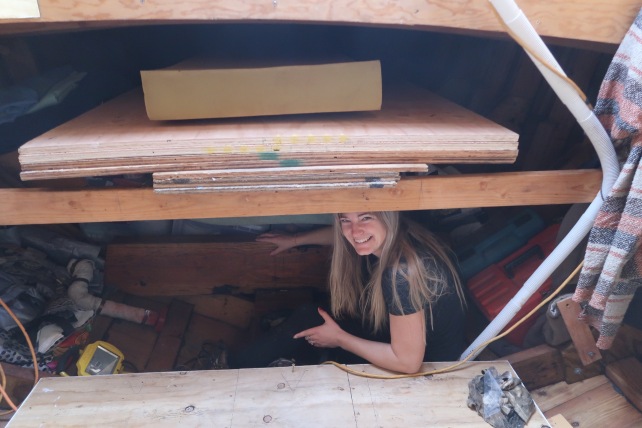 …Once you get a lot of crap back there that is! 4 full sheets of plywood, some scraps, our two bunk pads, tools, and household items. 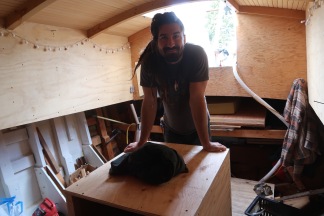 Garrett’s always thankful when I’m around to crawl into the small spaces. I think he also gets secret entertainment every time I hit me head.

This was the temporary bunk.

The final bunk will go from the frames at station 4 and back up to the half bulkhead where the head will be. The foot of the bed will have cubbies for clothes. This space will have to make room for the main mast.

The “funk” as we’ve been calling it (forward-bunk) will be a little lower than the temporary one so we can sit fully up in bed. Again, there will be big hatches for storage and access to the bilge before it’s “complete.” We’ve been staying off the boat since the end of November but once the bunk is done we can start on the galley then think about moving back on board 🙂

Red had to be one of them so that we can all look as good as Rediviva!

The shirts (sweatshirts and tanks too) play a big roll in funding projects on board. The next item we are saving for is the thrust bearing which is about $200. 50% of the shirt sales come back to us! Thanks for reading and all that you do to encourage this build. I love reading all of your comments and a heads up: next video will be coming out on Thursday!!! See you then 🙂