Ruth and I have been together since we were 15, and have been sailing together for the last 6 or so years.  We love everything about the cruising life, and plan on living like sea gypsies for the rest of our lives. The only problem is we are way to picky about our boat… We have a passion for traditional wooden boats, and often prefer the ways of old with anything we do. It has taken us six years and six different boats to realize that we have a hopeless self destructive addiction to wooden boats, and thats not going to change…

We bought our first boat together when we were 17. she was a run down 30 ft fiberglass sloop. She was totally bare and smelled like fish-pits, but she was good enough to get us out sailing .when we bought her she had no engine, no toilet, no water, and sails from 1964. After spending countless hours fixing our little turd up we set sail for Mexico when we were 18. 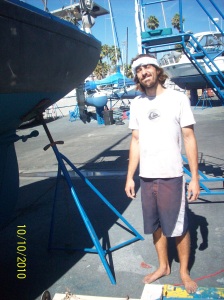 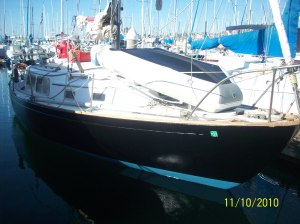 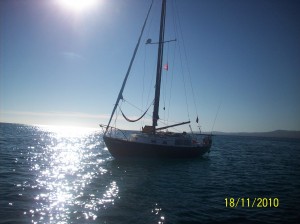 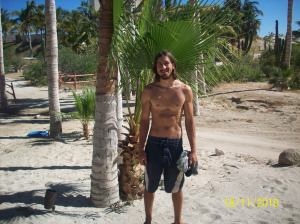 After sailing around in the sea of cortez for a bit we decided that the life was definitely for us. we also decided that if we were going to commit to more serious sailing then we should get a boat suited for blue water. After selling our little sloop we started boat searching with the plan that we would buy another fixer upper fit for blue water sailing. We would spend six moths or so fixing her up then set out again….. Then we found Baltia, and so began our love affair with wooden boats. 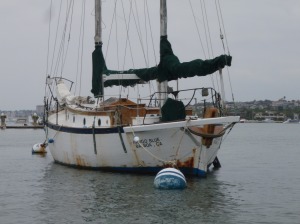 Baltia was a 1946 john hanna ketch. She was 36ft on deck with a beam of 13 ft, and she weighed 37,000 lbs. She was quite the beast. Baltia is a bitter sweet memory. She was our first wooden boat, and the start of it all, but I can’t help feeling bad for where she ended up after we sold her. I didn’t know much about wooden boats when we bought her. I spent much of my free time reading, and learning, and the rest working on Baltia. 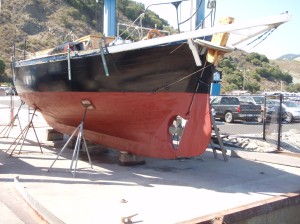 After living aboard and working on her for over a year, Ruth and I made the decision to sell her after uncovering some bigger issues with her hull. We were back and forth on the decision, but decided we needed to focus on our life and our upcoming wedding  rather than such a large boat project. looking back on it now after 4 years of working on wooden boats, and cramming my brain with as much knowledge as I can on the subject the sad thing is that she really wasn’t in that bad of shape… So it goes.

The next chapter of our nautical ramblings came in the form of a kettenburg 40 called Bravata. She was a 40 ft mahogany racing sloop built in 1959. Being a racing boat she was not really our normal style, but damn she was sexy! 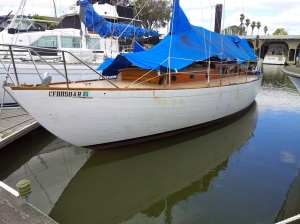 She was a gentleman’s yacht Built like fine furniture out of real old growth mahogany. We got her for a song because her stern was rotted out, she didn’t have an engine, and she needed about 8 new frames. We were very lucky that Napa Valley Boatyard was so awesome, and let us haul her for the refit (although I could see their doubt when I told them that we would be done in a month…) Boatyards don’t like wooden boats. Especially when they need work. Ruth got an awesome job at a wine shipping company while I set to work on Bravata. I built her a new stern, fixed her frames, and dropped an old diesel in while Ruth kept us both very hydrated with amazing wines that work sent her home with daily. 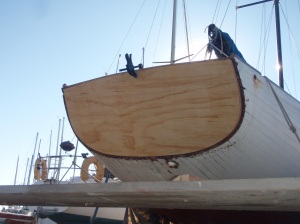 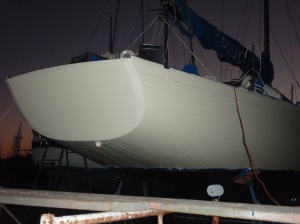 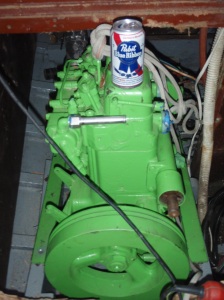 We launched on day 30. Now that she was more or less seaworthy we decided that although beautiful she was not the boat for us, so up for sale she went. We also learned that we could make a living from fixing up old wooden boat’s then selling them, and at the same time save an awesome part of history that may have been destroyed otherwise. Definitely best of both worlds for us! So we did it again.

Ronin was next. She was a 1951 Ralph Winslow ketch, and by far our most ambitious project. Nearly every frame in her hull was done for at the turn of the bilge. She also needed some plank repairs  as well as numerous structural repairs throughout. After stripping  her interior we hauled her for the refit. Which at first consisted mostly of demolition.  I decided the way I would go about the frames was to cut out the bad section, laminate in a new piece then run a full length sister up next to it. Essentially creating a double frame, just laminated instead of sawn. I decided to do this because in my opinion she was framed way to light in the first place, and I wanted to stiffen her up quite a bit. I am always learning as I go, and in no way am I an expert. Looking back I would do the job differently, But I have learned a lot since then. We also replaced numerous floor timbers, and decided we would try our hand at the age old practice of copper plating the bottom.

We couldn’t find much info on copper plating so we just kinda came up with how we thought it would work, and went at it!

We spread on a layer of tar, then felt, then another layer of tar, and finally the copper on top tacked into the hull with copper nails. 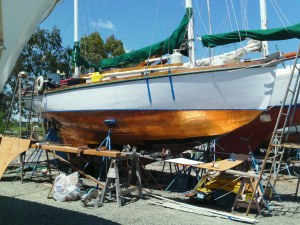 It ended up looking pretty sweet 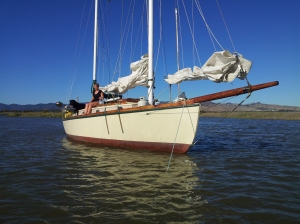 And Scout a rawson 30 cutter.