Rediviva’s name is on a piece of paper sitting upon a US Coast Guard desk mixed in a stack of documents awaiting an officer’s glance. Who knows how tall this stack is? If it’s a messy or neat stack? But! She is on her way to becoming a legitimized recreational vessel. An ‘exploration unknown traveler to carry her salty gypsy crew to distant shores’ vessel; as we like to call her. The paper reads: 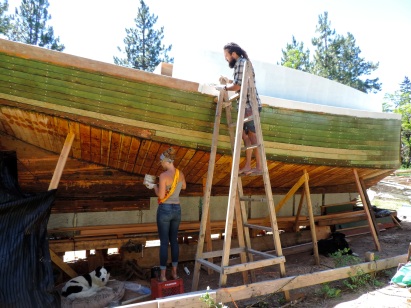 So in the meantime since we have “3-4 months,” so they say,of time to kill we’ll push our funds to the limit and keep working. More epoxy, CreoCoat, Primer, Rust-Oleum, PL Premium, and bolts but thankfully no lumber!

With the summer heat ablaze and the shed removed the decks were starting to get pretty toasty! The original plan, which may still happen in the future, was to plank the deck with fir strips (gluing not screwing) but running short on patience, time, and money we’ve pressed forward and painted the decks instead for right now. Painting allowed us to protect the decks quick from the brutal UV, the wood doesn’t mind too much but the epoxy on the other hand… 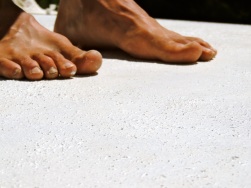 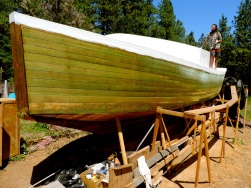 We used a coarse textured deck-over paint first, then 2 coats of primer and sand, with the consistency just right we are ready for the almond color oil-based finish paint. Good and cheap ol’ Rust-Oleum brand.

While I tackled the rest of the bungs and Hoffa covered the deck Garrett has been checking off all the small crucial details. Planing down any high points in the bottom planking, finish fastening the transom to the stern knee, companion way hatch measurements, ordering materials, and most importantly determining the waterline. We’ll be using CeroCoat as a base layer of protection for the bottom planking.

Cruising in tropical waters is absolutely in our future so the concern of worms and other wood munching sea creatures is real. Creosote being so incredibly poisonous made it a top pick for coating the underbelly of boats for many years this is also its downside. Today there’s an alternative called CeroCoat, some of the more harmful poison removed, still fights off the hungry teredos and is purchasable.

This product will never touch the water just soak into the wood and act as a barrier under the primer and anti-fouling bottom paint. The jury is still out on colors for the boat. The idea for red topsides on Rediviva still sounds super sexy! After the decks get their second coat of almond the bulwarks are up next. Moving on to bulwarks marks the transition from the priority list to secondary list of to-do’s before transport. No wasted time around this shipyard

One thought on “And the Beat Goes On”