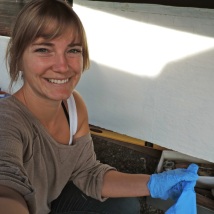 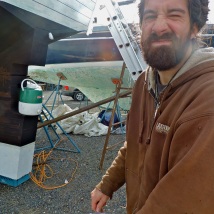 My mind’s been having trouble remembering where in time I am. It now feels like an eternity ago we were in the remote hills of Washington and having done two restorations in the Napa Boatyard there’s a sense of home about the yard, a sort of normalcy to it that feels like we never left. The last project we finished here was in 2013 and so much of the yard is exactly the same. So many boats still sit in the same spot untouched, the yard guys go about their business at the same pace, the talk between old men and their boats is the same, but we are not the same. The difference being, before, we were kids. We still carry the same title around the boatyard, “The Kids,” but we’ve earned our salt with a vessel built by our own hands standing behind us. When the yard first met us we were 20 years old and wanted to restore a 1959 Kettenburg 40 that, among many things, needed a new transom. Garrett told them we’d do this in a month. We splashed on day 30. Following with another restoration but this time wanted to bring back an old technique for protecting the bottom from growth we copper-plated our little Ronin. Reframing almost the entire little 30 foot boat and rebuilding the interior we launched in 6 months and she was sailing. So when we called the yard manager and told him we’d build a 35ft wooden boat keel to stem he didn’t hesitate to let us in. It feels good to be a yard-tard again!

Our new year started with a stop at the local Home Depot before going to the boat. It’s so nice the store is 5 minutes down the road not an hour! We restocked on sealant, chip brushes, a putty knife, and of course TAR. 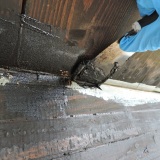 Garrett continued caulking on the Port Side leaving me with a fresh gallon of black magic to seal the bottom planking on the starboard side. It feels so good to get our hands on the boat again. We both feel the momentum picking back up and the water is a mere 50 feet away. I’m such a nerd because I love working tar into the tight spaces of the boat. I liken it to how a mother doesn’t mind picking her child’s boogers or cleaning spit up. That love is something special and not much else matters. So I take care smearing tar into the rabbet and working it up the spaces between planks. The bottom planks won’t receive cotton until later in life because in their youth they’ll swell together tight but to lessen the flow of water upon launching until that happens the tar is there. Like training wheels. We use tar because we want the planks to be able to push it out as they come together.

Once all the bottom seams are tarred and the topsides are sealed we’ll be able to paint!!!!!! A few weeks from now Rediviva will be reveling in her fancy new colors. 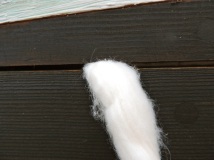 Garrett’s over halfway done with the port side cotton. Another good day and he’ll be able to lay the caulking mallet down for a while. This year Rediviva will see the water. This year we will sail. This year Garrett and I will realize this dream to the finish line. 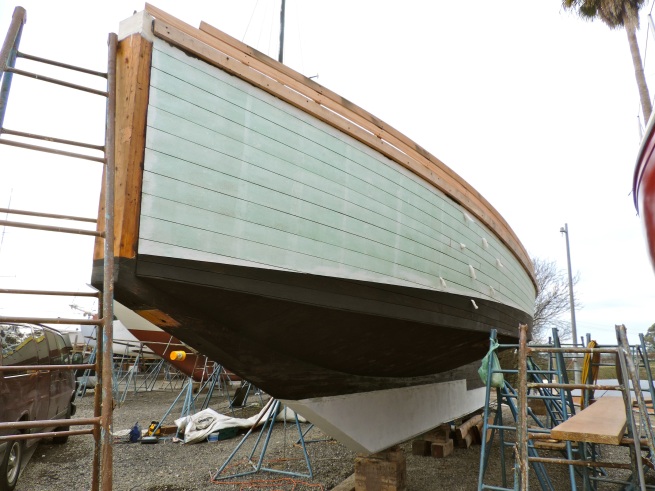 Thank you everyone for helping us build Rediviva.

Cheers to an amazing and prospective fresh year!