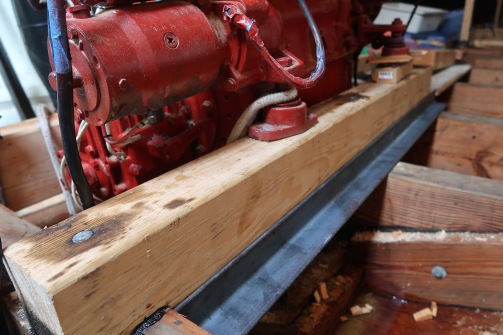 Now that we’ve decided where the engine is going to be it’s time to permanently secure the Westerbeastie. Resting on 4×6 engine beds wasn’t enough for Garrett…maintaining his “if it’s worth building, it’s worth overbuilding” mentality. There will also be angle iron runners. “What if we get overtaken by huge seas and Rediviva rolls…the engine has to remain on its blocks!” How can I argue with this guy??? 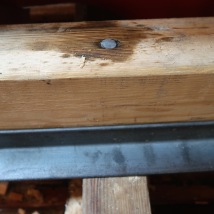 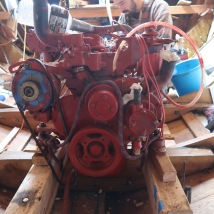 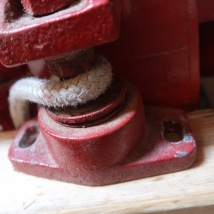 We’ve also ordered new engine mounts (picture above on far right) so we’ll have the old ones for back up. Garrett’s also ordered some 3/4 inch rubber sheet that will be a spacer between the mounts and the beds. 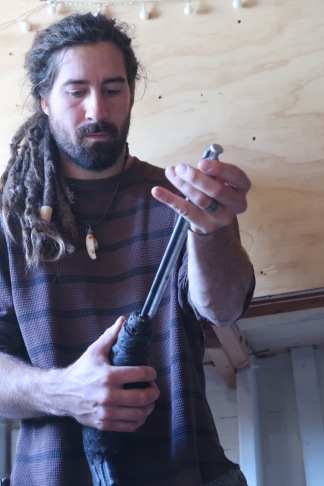 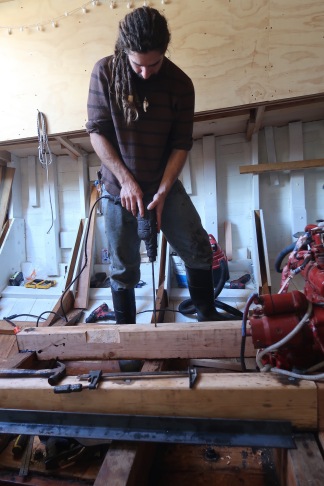 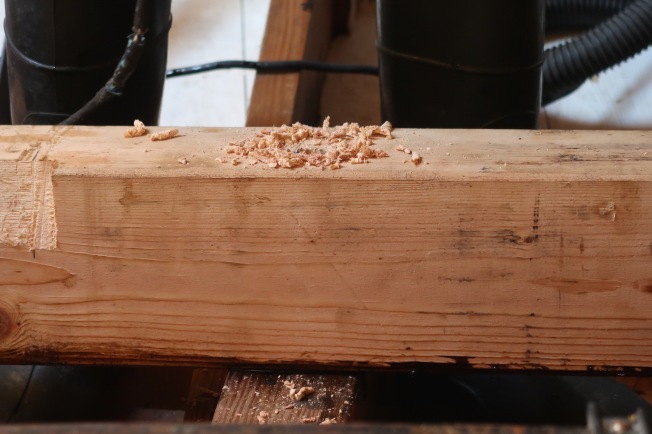 The beds are fixed into the floors with foot long hot dipped galvanized nails in three places. 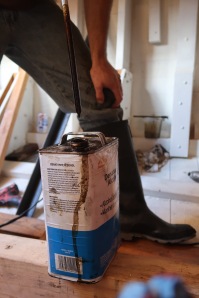 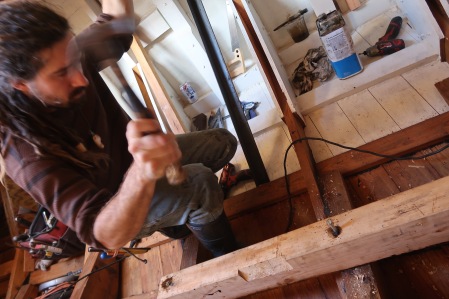 Lubed up with Garrett’s Boat Soup (mainly pine tar) the nails are hammered in. 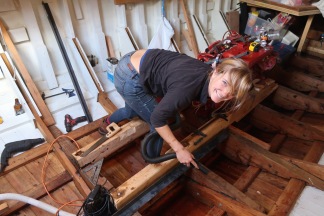 Then the clean up crew. 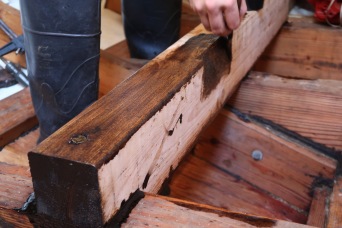 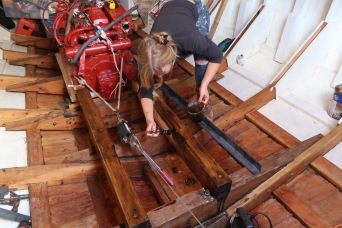 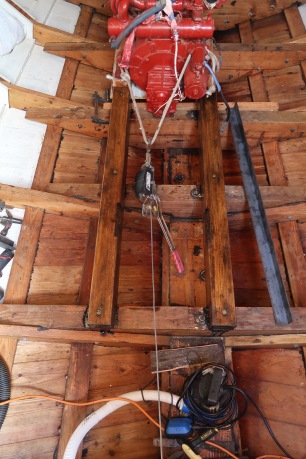 The engine mounts aren’t in yet and nor are the driveline parts to complete the engine installation so we’ll have to move the engine one or two more times after this (but we’re getting good at moving it back and forth.) 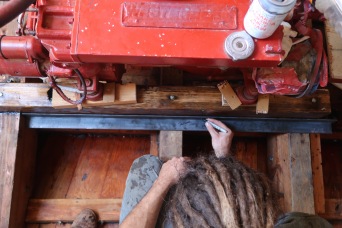 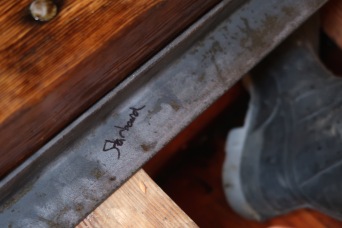 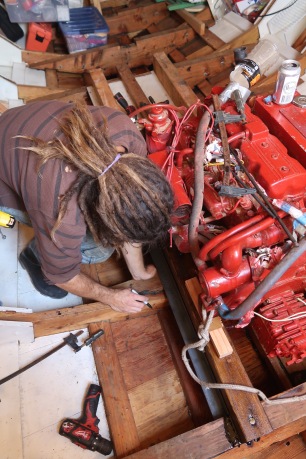 The beds are secure and now onto the angle iron runners. Garrett’s marking the spots where the lags are going to go so we can take the runners over to Tyler’s neck of the woods and use his drill press to make the holes. 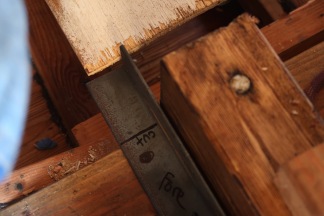 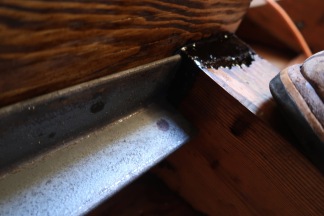 Some how this worked out perfectly: the aft floor is taller than the other forward two the engine beds lay on and Garrett wanted some sort of bracket to tie the runner into the third floor AND the over hang happened to be the right size! 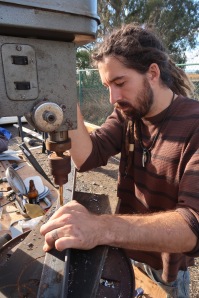 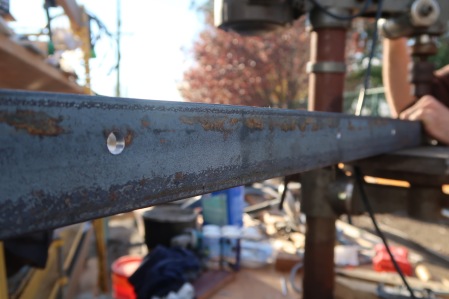 We drove over to Tyler’s spot in the yard and using the drill press made the holes that will tie the beds into the floors a little more. 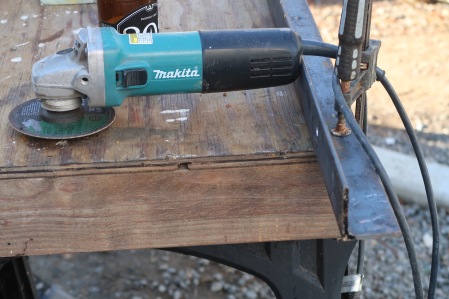 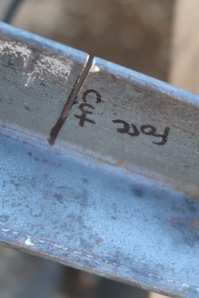 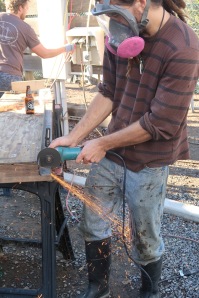 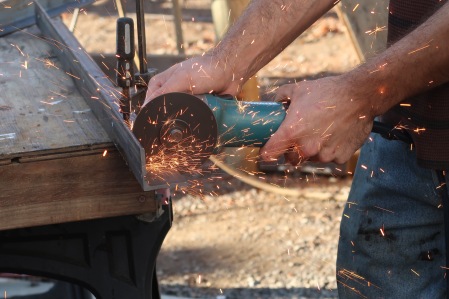 Then we did the same thing with the overhang for the brackets. 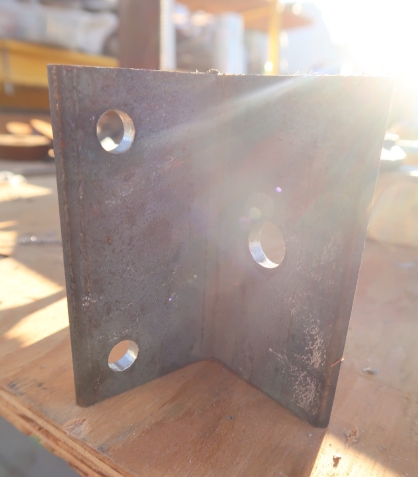 All that’s left before fully installing the runners is to paint the steel. Tyler has some two-part rockstar paint that’s perfect for this. I believe the brand is Devoe, it’s an epoxy coating. We went in on a gallon together because we don’t need a lot and the stuff isn’t cheap. We also used this for our rudder fittings months ago. 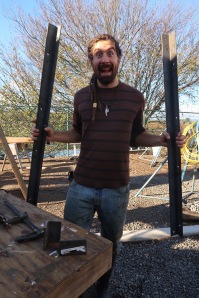 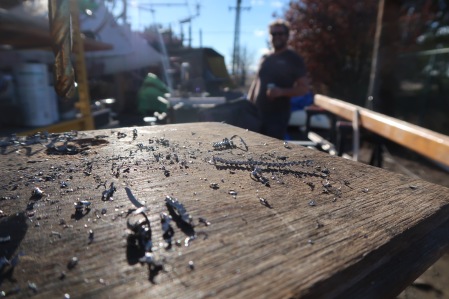 Garrett’s been on the phone, on the internet just researching and filling his brain with as much information as he can about u-joints and the various parts that go into the assembly. We’ve ultimately decided to go with a driveline company that specializes in this kind of thing. Mostly cars; however this might be in our favor as we will never have 400 hp or be running an engine at 9,000 rpms so anything they create will most certainly work for our little 52 horse motor where 2500 rpms will be pushing her. The assembly as a whole will include yolks, thrust bearings, a shaft, spiders, and a coupling. I too, have been looking at diagrams and am starting to understand what it is we are doing. I’m looking forward to when we have all the pieces so I can better explain and answer my own questions. This is another experiment of sorts and I think Garrett’s got a very good idea of what he’s doing. More to come! 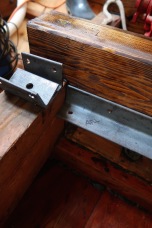 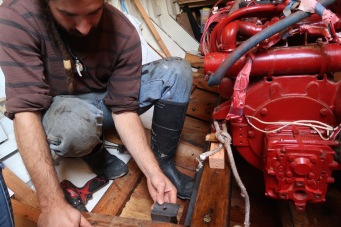 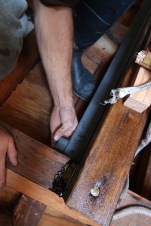