“I can’t believe how many things have happened in the last month. I mostly take videos rather than pictures these days, since our YouTube channel has been growing, but I should remember that pictures are still worth a thousand words. I’ve been flipping through the film, as if I still used film…, and realized we’ve gotten a lot completed. I can’t believe Garrett failed to mention another huge thing that got checked off the list; cutting down the last of our trees for spars and such! Garrett’s brother Reid was in town and seemed like as good a time as any to wrangle them out of the forest. My camera died, however, I know very dramatic! Then my phone died so these are the only photos I captured… 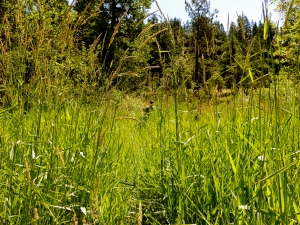 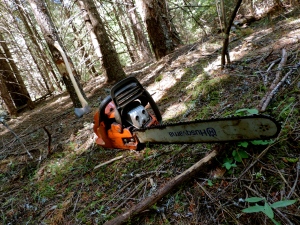 The day before yesterday was really exciting! I’ve been waiting for this moment for awhile. We removed ALL the cross bracing from the frames. We have 7 deck beams, which is all of the full-length beams, up! We had to leave some of the top bracing on the frames to keep her ridged until we can install the carlins (cabin wall framing) and side-deck beams. For those who don’t know what I’m talking about (Mom) you will just have to wait and see. All will be revealed in time. We began the day thinking we had decided on a Pilot House and Flush Deck lay-out with a Focsle and we finished the day with changing everything and installing deck beams to accommodate a Center Cock-Pit with an Aft Cabin and Focsle layout… Garrett says it right, “We no longer make plans, we make ideas.” It’s the only way we can stay sane and keep everyone else from going crazy when we change our mind again. Sorry Fam! They’re used to it by now… Family – “Wait, I thought you were…?” Us – “Yeah, no… That was yesterday!” 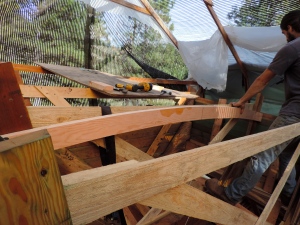 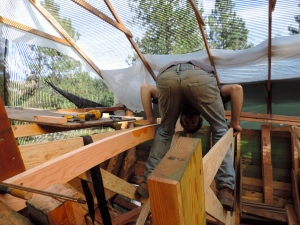 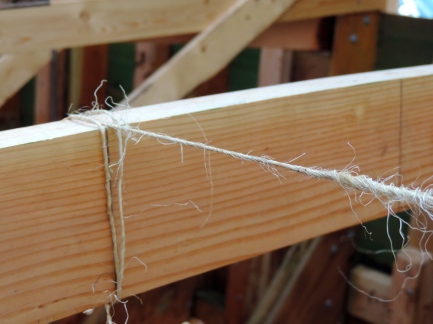 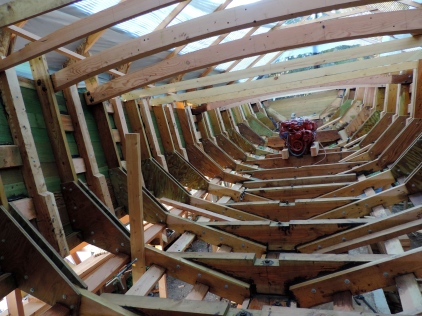 Now we can see what we are working with! 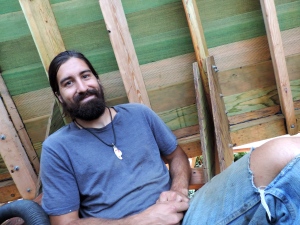 I love watching Garrett stare at the boat. I liken it to a mother watching the father smile down on their child. Knowing there is love there. This birth has been exhausting and tedious but when you can look at what you’ve done and still smile you know you are doing the right thing for you. At the end of the day I can’t help be proud of not only Garrett but myself too. I’m still here and I’m still smiling! Something about a man, his boat, and a dream.”