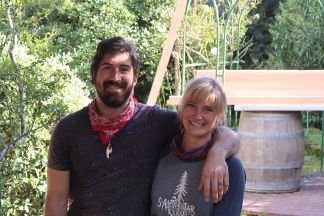 We’ve been waiting for this day. We were rained out the previous day and eager to get to some real work on the next project; the bulwark planking. Every Home Depot run was also a scouting mission to find pieces of lumber for the task. Four maybe five trips, spread out over weeks, we found all we needed in the construction grade lumber pile. It may be green but nearly all pieces are clear and will dry quick with the change in weather. A little help will come from the wood being a bit green anyway; making them easier to bend and take the curve of the dramatic sheer Rediviva has. 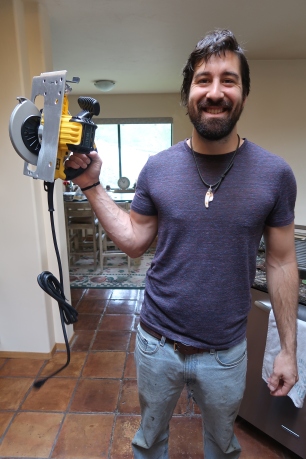 When we got to my parent’s house there was a lovely package waiting on the porch. A brand new circular saw to replace the very tired one we have. Our old saw is patched in two places on the cord, doesn’t allow you to adjust depth anymore, and the base no longer stays level… It was time. Thanks to Sean!!! Garrett is looking more professional everyday. He’s got the haircut now he just needs the tools. Sean is also the main drive behind starting the Amazon Wishlist which has blown our minds! It has been far more successful than we ever imagined. With giant smiles on our faces and gratitude in our hearts we are going to kick some boatbuilding butt! 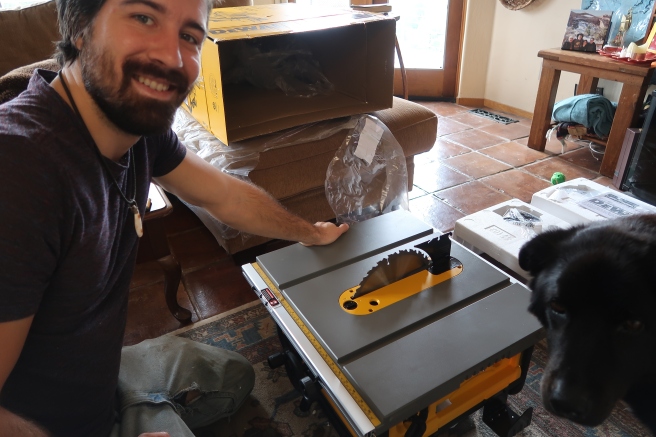 From the last two t-shirt sales on Bonfire we bought ourselves a brand new 10” table saw. We’ve been working off the same saw since Washington and we’re convinced it’s cursed. Probably from its previous owner’s wife who hated him spending more time in the yard than with her. It was supposed to be top brand, JET, but it never could keep up with us. Those days are now in the past! 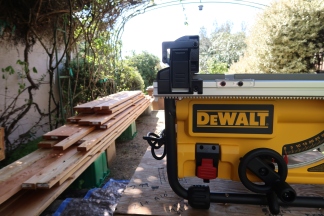 Our pile was high and the goal is to get 3”x1” planks to cover the bulwarks. To best describe bulwarks I say it’s a lot like our “fence” around our home but on a boat. To reach the goal we have three cuts to make. #1 Get a clean edge. Looking at each board individually then deciding the best edge to remove taking into consideration any knots or odd bends, curves, or wonky bits in the board and how best to get as many 3” planks per board. Any thicker off-cuts will be used for deck planking if possible. #2 Rip each board into the number of 3” planks we can get. We had 2×4’s, 2×6’s, 2×8’s, 2×10’s, and 2×12’s so all but the 4bys and 6bys we could get multiple planks. #3 Rip every plank on edge to bring them to an inch of thickness. We didn’t get this far…

Towards the end of the day the new tablesaw’s fence began to slip. We went to rip a board set at the same width it had been and nothing was removed… Got the measuring tape and ah-ha we are not ripping at precisely 3” any more… So… how many do we now have to re-rip??? Turns out just 6 planks were off but the fence continued to slip so we had to check each board before and after and the distance on the saw. Needless to say this sucked the rest of the daylight time we had. 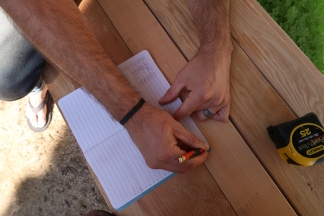 We cut 41 planks. We need 36. This leaves a couple extra if any break while trying to take the bend. We have a whole mix of lengths. Starting at the bow, where the bend is more extreme, we want the longest pieces. In total, each side (port and starboard,) will have 6 runs consisting of 2-4 planks. On the right side of the notebook (above) is a ruff plan of how we’ll lay out the runs. Run one is closest to the deck then we’ll work our way up. This is also the most important because it sets the line for the rest of the runs. There will be a little gap between the deck and the start of the bulwark planks for water shedding. For this beginning run we’ll do it out of two 20 foot pieces. The longer the board the easier it is to bend them into place and because two 20’s will do the length of the boat this also means only one butt joint (where the two pieces meet up on a stantion) which is good for the eyes, one straight line. 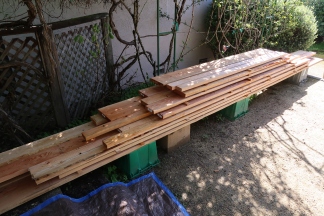 Garrett and I are so anxious to get outside! The engine is still coming together and that’s what we work on when it’s raining but our real motivation is in the next projects that get us outside. “We are solar powered,” Garrett says and it’s so true. The energy we get from sunny days and fresh air is paramount. It was nice too to be doing a boat project separate from the boat. Garrett’s been cooped up inside for far too long. The slight tinge of sunburn on our shoulders is invigorating. 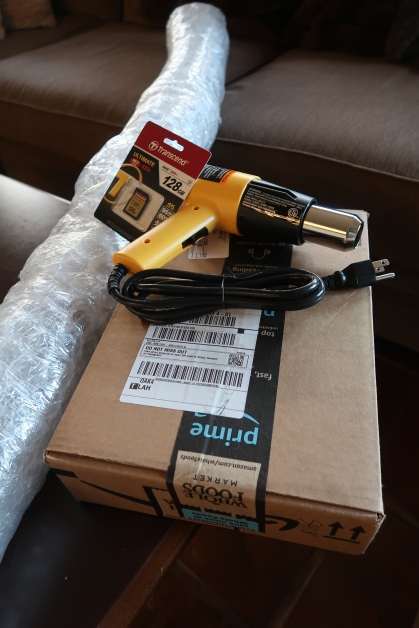 To top off and make this great day even better we had some more presents on the stoop.