“…Another day of planking and trying to maintain momentum on progress. We are both really looking forward to finishing the bottom planking so that we can officially say, “We have a hull!.” One year and 6 months in and we have a hull! Smarter people skip this by buying a factory built hull as a kit or purchase and pick up where someone else left off in their aspiration to build a boat from the ground up. It’s not easy to keep telling yourself it will all be worth it when you’re floating someplace tropical in boat made from your own hands entirely when you’re deep in the middle and up to your elbows in tar! 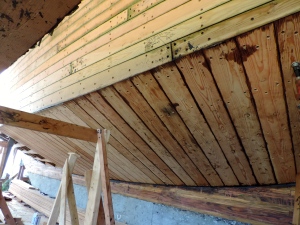 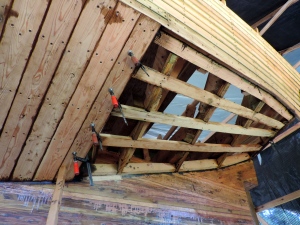 We have over 30 planks up on the Port side! The pictures are a little further behind. Garrett decided to keep going on the Port side and complete it before moving forward on the Starboard side. It’s now getting harder to capture all the planks in one photo without stepping out of the shed. By completing the Port side we hope that visual will be encouragement to plow through the other side. That’s the idea anyway…

Garrett’s made a ruff schedule to get 4 to 5 planks up a day depending on how his back is feeling. If we can hold onto that it means 12 to 15 days left of planking! 2 weeks!! We can do that!!! One last step to complete the ruff hull (still needing to sand/plane down, caulk, and prime/paint.) If we can push through these last weeks of being on the ground outside the boat working we can then be inside the boat working on her deck becoming closer to trucking. Every step completed means one step closer to being in the water and getting back to life!

Not sure if we have ever explained the meaning of Rediviva’s name. You could look it up I suppose but it’s a latin word meaning revival or coming back to life. Her name has become a sort of mantra for us. Once she is “done” it will be a plunge back into life. Our life. The life we find meaning and fulfillment in. The water, the ocean, is home. Traveling is home. I first found this word looking up local history of our current location, her birth place. In the gorge, Columbia Gorge, we have been locked but still next to this awesome body of water that leads to the ocean. Eventually, like us, the Columbia River spills into the pacific. The Columbia was named after one of the fist American ships, the Columbia Rediviva (rediviva was added to the ships name after a major restoration) , charged with discovering the famed northwest passage once believed to be at this lower latitude but instead founded the beginning of the fur trade which most of this area was known for. Now known for kite boarding and wind surfing, wine making, and micro breweries. Not so much for boat building…

But here we are.

Oiling the masts with used engine oil from our truck. Little things I can do to keep busy while Garrett continues on bottom planking. I can tar and preserve the backs of the planks but cutting, shaping, and fastening is all Garrett.