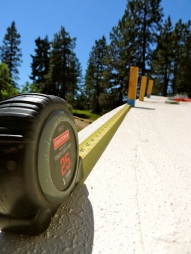 All 36 bulwark stanchion posts are through bolted in. They are douglas fir with galvanized threaded rod epoxied inside and through bolted below decks bedded with PL Premium roof adhesive. We’ll wrap two planks around the posts, most likely we’ll use western red cedar and finish bright.

It was a group effort. Garrett cut all the fir and rod. Him and Hoffa epoxied the rod into the posts. Garrett drilled through the deck while Reid (his brother was in town so of corse he was put to work) cut the thread into the ends of the rod. Hoffa and I taped the posts and Garrett taped the deck off. I was on deck gooping up the base as well as the deck where the faces met while Hoffa was down below putting on a nut and washer then making the bond tight. We wrapped a batten around the posts to make sure they were turned in all alliance with the curve of the hull. And presto!

Next up we carve the waterline in and primer the topsides!!!! 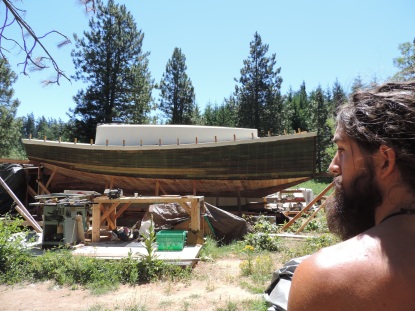