There comes a day when all the prep work is done and you finally get to put up planks. The big moment where all your planning, hunting, and gathering pays off in visual progress. 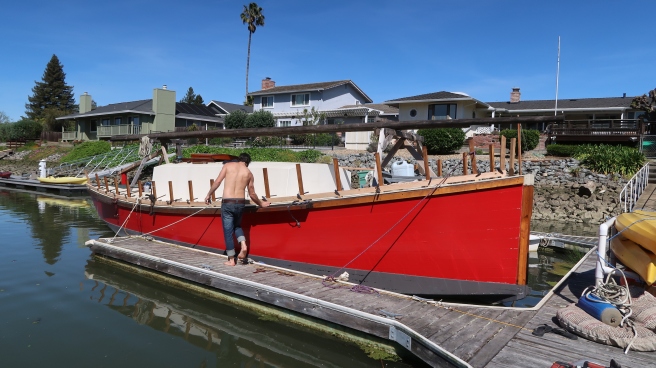 We went into planking the bulwarks thinking we were going to do six runs of planking. Each run consisting of two to three planks. Our first one, being the important trend setter for the rest of the runs, had to be out of two pieces so we only have one butt to mess with. Attempting to make that butt joint seamless. We thought we’d have to use two 20 footers but to our delight a 20 and a 16 did it.

We wanted a little room between the bulwark planking and the deck for water drainage so we used some off cuts of port orford cedar to gauge that space at the base of every stanchion. 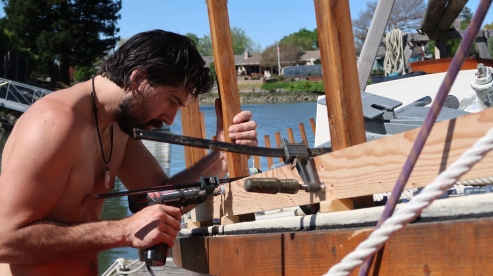 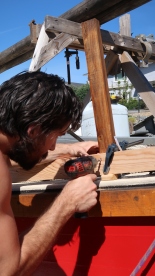 Once pleased with how everything looked Garrett drove the fasteners home. On every stanchion each plank was fastened in two places with an 8 gauge stainless steel inch and 5/8th’s screw. The planks bent easy and were held temporarily in place with at least two clamps. Back to that tingling soreness in Garrett’s hands where even after the sun has set the pulse of the day continues to beat. 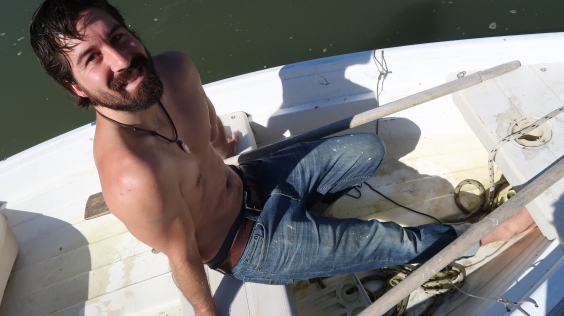 Much like the hull planking and the sheathing, when you put up a plank, no matter how long or tall, you have to stand back and admire how the boat is transforming. It’s much nicer this time that this can be done from the dinghy! In the WATER.

Day one of putting planks to stanchions finished with run two. The day was glorious. We definitely took our time to appreciate every board and the fact we were finally completing the bulwarks the way Garrett wanted. If you can remember far enough back we’ve already done the bulwarks once before but they turned out to be more decorative than anything. Short little stubby things not tied into the structure of the boat. The original dream for building Rediviva was to keep her as traditional as possible. This includes “ship bulwarks,” ones that make you feel safe and secure on deck. When a ruff sea hits you certainly won’t feel fear going forward to change sails!

We staggered the butts at least a stanchion away from each other. The starboard side’s first four runs we were able to alternate 20 than a 16, then a 16 then a 20, and so on. Like every human we are not perfectly symmetrical neither is Rediviva. The port side took a couple different lengths to stagger the butts and keep longer length planks in use for they were the easiest to bend into shape.

Day two started out with cloudy weather perfect for coffee and as the day progressed those clouds parted and the sun signaled it was time for a beer while we gazed upon completing run number three. 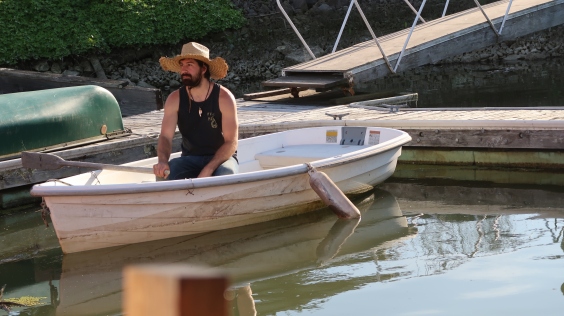 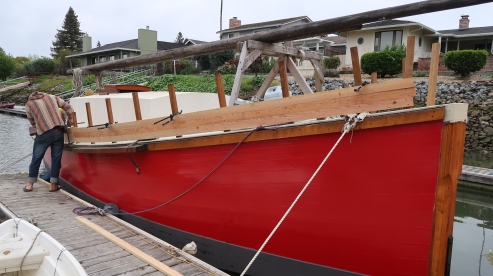 Run number three was cutting it close trying to use a 20 footer and still make a solid landing on the first stanchion as well as the stanchion at midship where it ended.

Finishing that run was easier than starting it. Moving on! Run four, like the rest, started with Garrett inspecting which plank is best; curve, grain, and dryness. We are using green lumber and thanks to a follower that bought the moisture meter from the Amazon wishlist we were able to test each board and see how it’s drying. After cutting our raw boards down to the 1in x 3in plank they were beginning to dry nicely. We started with a meter reading in the teens to low twenties of percentage of moisture and by the time we were ready to plank some boards were as low as 10%. 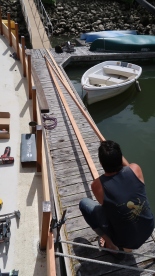 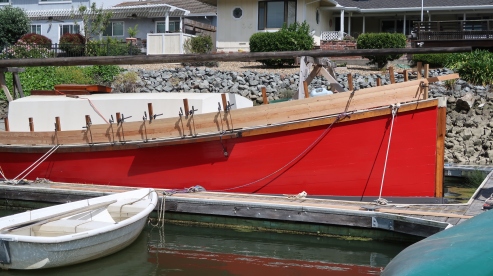 After run four this was when we questioned whether or not 6 runs is too many. Four was looking pretty tall… Making the final decision after we completed the fifth run; in deed six was too many and five was enough. 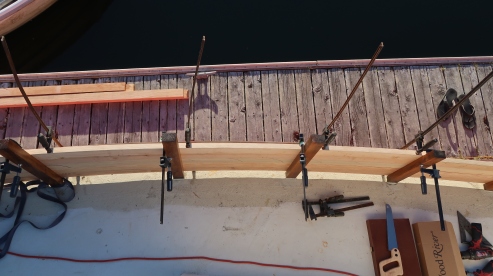 Our long clamps have taken a beating from the original planking. We may have pushed them to their limits twisting and bending old growth vertical grain 2in by 3 or 5in wide douglas fir topside planks into place. We dug them back out to serve once again finishing the starboard side bulwark planking which towered above MY head.

Being in the full swing of things day two finished the starboard side. Completing the starboard side in two days felt incredible. Full days of work with the beautiful sun shining above us. So two days of putting planks up then another two full days sanding, leveling, and bunging that whole side. 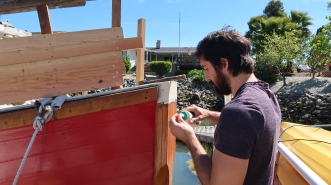 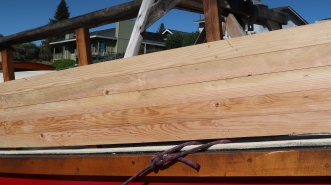 Once we got to souping the bulwarks we were excited to be back to putting planks up on the port side. Sanding wasn’t nearly as fun as planking under the burning ball of fire in the sky. We needed the weekend to recover and regain strength!

Perfect timing for the sky to leak. We needed a day to relax but still feeling guilty about not working on the boat the universe helped us out and gave us a rainy day. Sure makes it easier to just chill on a blustery day than if it was beautiful working weather. After we get the port side even to starboard we’ll figure out the cap rail and transom bulwark planks. The stanchions are left long for now until we decide whether the cap rail will be level or follow the crown of the deck like the bulwarks do leaning slightly outboard. 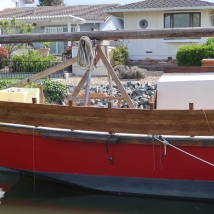 We are so pleased with these bulwarks. The height is perfect and the foredeck space for working the main mast with the added security of the bulwarks is insane. So happy! The bulwarks are awesome!!!