Down the road she went 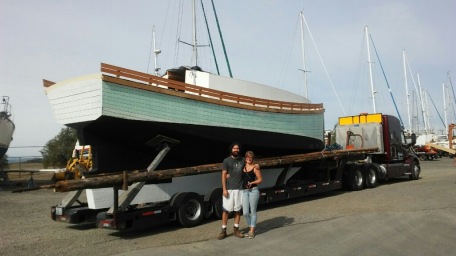 and two days later appeared in Napa on Friday morning

then the yard brought on the Travel Lift! 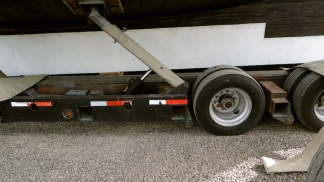 The straps were wrapped around her belly and slowly took her 20,000 pounds off the trailer

It wasn’t until the boat was in the slings that Garrett could breathe easy. We’d made it out of the woods. The yard had to break for lunch which gave us time to do the same. Burritos and beer. Listening to the chirp of swallows and the clang of rigging. Welcoming sounds. It’s been 3 years since we’ve lived near water. Rediviva stands tall next to her fellow ships.

We were joined by some familiar faces and some new ones. My mom broke away from work to greet Rediviva at the gate while my dad caught her at an intersection on the way to the boatyard (video will be up for our Patrons)

The engine started and carried her to her new resting place. Awaiting a spot in the “Working” yard. We’re guessing we’ll sit in the storage yard for about a month. Until then we’ll kill time and take it easy working only on the masts and rudder outside the yard.

and it gets even better! They were able to squeeze us in right next to our buddy Geoff’s Cape George which he’s stored here while he’s working up in Alaska. We hope to see him next month 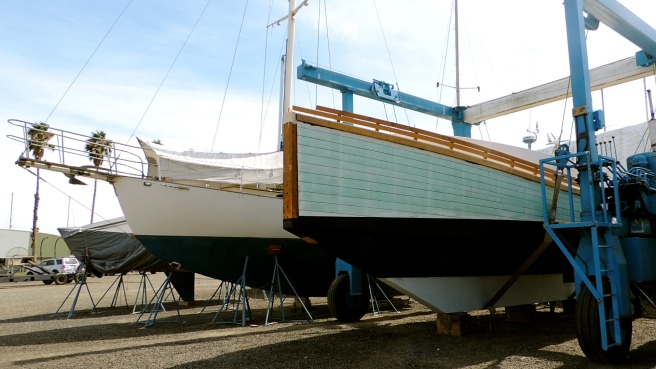 The calm and quite started to seep in as the stands were secured, the straps rolled up and the travel lift backed away. 3rd in on the left she can relax knowing she’ll be safe through the season.

Garrett’s brother, Reid, stuck around for the whole day and helped us crack our first few beers on deck under the palm tree landscape.

For those of you who’d like to know where exactly we are: