What makes a happy captain? Progress. Garrett is just blasting through the caulking. He’s only got about 6 feet to reach the bow on 7 seams and then the rabbet and chine on the port side left to go! Other than the sickness Garrett’s come down with, which is now just an annoying residual cough, his body is feeling great and his mind is catching up. I’m so thankful for his determination.

Swab on the other hand…

Won’t even get out of the car. 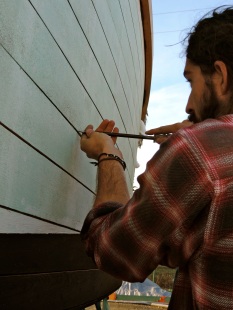 Garrett starts by cleaning up the seams with his makeshift reefing tool homemade from a flathead screwdriver. This removes any dried tar in between the seams and fares any uneven cuts. 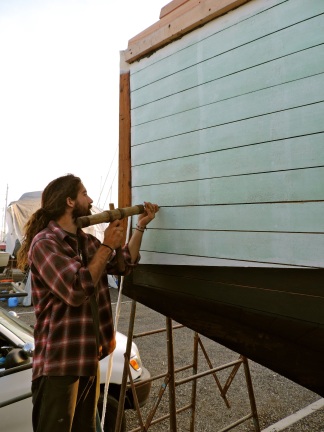 Unfortunately, the marina store hadn’t received the next shipment of cotton since the last time Garrett went in and decimated their stock. So we’re a little held back from finishing the port side but that’s alright, plenty of other tasks to do.

Like priming all the stuffed seams and hunting for prop shafts. After the hull is painted the next task before launch is to make sure we have all the external parts for the engine; prop, prop shaft, stuffing box, and cutless bearing. We probably won’t fully install the engine, meaning lining up and bolting, to save time/money but we want to have all the fittings for under the waterline to be there so we can hook it up later. Maybe a trip to Minney’s Yacht Surplus (aka boat candy store) is in order!

With each day getting a little longer we’re excited to be able to get more hours in. The earliest the sun set was 4:50 here which gave us an extra half hour compared to Washington. We’re feeling pretty good with the change that’s for sure!